\ For Employers \ For Injured Workers \ For Insurance Adjusters \ For Physicians \ Podcasts \ RateFast Podcast: Attorneys in Workers’ Comp: A Historical Perspective 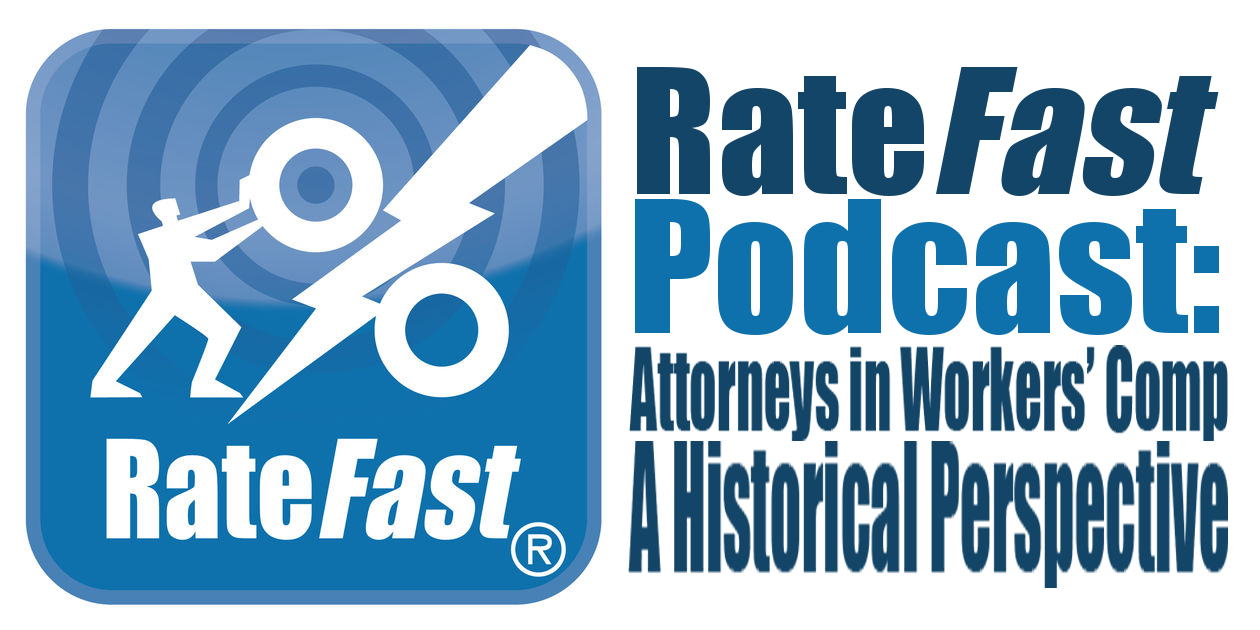 This article is a transcriptions of an episode of the RateFast podcast, which you can listen to by searching “RateFast” in iTunes or the iOS podcast store.

Truly, it’s not ideal to have to hire an attorney for a work comp claim. Work comp attorneys however, are hired when the events of the claim are not ideal.

Originally workers’ compensation was supposed to simplify the process of an occupational injury or illness. As industry got more complex, corporations got bigger, and fraud was more and more common, attorneys became a necessity.

We spoke with attorney Phil Walker about his over 30 years of experience with workers’ compensation, how far it’s come, and where it appears to be going.

Applicant attorney (noun) – an attorney hired by the injured worker to dispute a workers’ compensation claim. Applicant attorneys are usually brought in by the employee to dispute the insurance’s decision on the payout of a claim, or their objection to work comp reports.

Defense attorney (noun) – an attorney hired by, or already working on behalf of, the insurance company of the employer, or the self-insured employer. Defense attorneys usually come at the defense of the company when the injured employee decides to take legal action and summons an applicant attorney.

DEU (Disability Evaluation Unit) (noun) – a California sector of the California Department of Workers’ Compensation (DWC) determines permanent disability ratings by evaluating medical descriptions of physical and mental impairment. Here is a link to the DEU webpage. Not to be confused with the Drug Enforcement Administration.

Phil: It’s very nice to be here. Thank you for having me, John.

Dr. John Alchemy: So Phil, one of the things we wanted to do in the series here was educate people on attorneys in workers’ compensation and who they are and what they do. But before we get started, would you tell us a little bit about your background in California workers’ comp and why you got into it?

Phil: Sure, I’m happy to. Well, I think it’s always interesting how people do get into workers’ comp, because I’d never in my life heard of an attorney who said “I went to law school so I could get into workers’ comp.” And part of the reason for that is they don’t teach workers’ comp in law school. I remember that in my law school, it was a footnote in the personal injury book, and it said “You read these 700 pages, but if the injury happens at work, it’s something called workers’ comp and we don’t really understand it.” But workers’ comp has actually been around. It was invented in Germany in the late 1800s. It was invented there because the Prime Minister wanted to stop a revolution. And so he gave the revolutionaries some of the things they wanted, and one of the things they wanted was to be compensated if they suffered injury at work. And that system actually was adopted in the United States, and in California, our workers’ compensation system grew out of the New York State workers’ compensation system. And we’ve had workers’ compensation in California since the early 1900s, basically. How did I get into it? I went to law school on the East Coast, [but] I wanted to live in California. I saw an ad for a job in California, and it was for a young brand-new lawyer helping a more experienced lawyer doing workers’ comp. And I answered the ad and he hired me. And that’s how I wound up in it. But I found out that I really enjoyed it, because I loved the medicine of it, and I loved often the strategy of it. And so my background, I began in workers’ comp, I was then hired by U.S. Steel Corporation as their [in-]house counsel, handling all workers’ compensation in the Western United States for them. From Mexico to Canada, and from the Rockies basically to the Pacific Ocean. So I had to learn a lot of different systems. And that was very, very interesting. I worked for various law firms, became a partner in various law firms, and had the privilege of representing a lot of big entities. University of California, Stanford Medical Center, Alcoa Corporation, U.S. Steel, [and] United Airlines, across the course of my career. And then in 2008, I started my own workers’ compensation practice. And I’ve had an interesting focus in my work because I am one of the national experts on the book that we use in California to calculate permanent impairment, called the AMA Guides to the Evaluation of Permanent Impairment, Fifth Edition. And I assist companies when they’re trying to find out if doctors’ reports are correct. Very simple. I also now do an enormous amount of work as an expert witness, where I review how claims have been handled by insurance companies and third party administrators, to see if they’ve been handled correctly or not, and if not, to identify where the errors have been made, and what that has cost the employer, basically. So I have over 30 years in the workers’ comp business, and now because I spend a lot of time reviewing claims from start to finish, I have the opportunity to really see how things are handled, and to see really good work, and also to see work that’s not so good at times. My work also involves both Northern and Southern California, and really and truly, we have two almost completely different systems going on in this state. And so I’m lucky, because I get to see how things operate both in the North and in the South. So that’s a little bit about my background, John.

Dr. John Alchemy: That’s great. And thanks for that intro. One of the things I was wondering, could you maybe talk about what roles the defense and the applicant attorneys play, and looking at it from the outside as a doctor or a patient, sometimes it just kind of seems that once the attorneys get involved, you know, things get a whole lot more complicated. But how is the system really supposed to work, and how are these attorneys supposed to help move things along?

Dr. John Alchemy: Well, that’s quite a landscape you laid out there, Phil.

Phil: I’m sorry, that’s what the landscape clearly shows me after more than 30 years of dealing with it.

Dr. John Alchemy: So, let me wrap up with one question here: If I’m a doctor and I’m in the room, and maybe we’re 8 weeks into the claim and it’s been a little bumpy getting stuff authorized, the patient will turn to me and they’ll say, “Doctor, should I get an attorney?” And I have two questions for you: One, what is the doctor allowed to say or advise, and two, does the doctor even have a role in making this determination on behalf of the patient? They look to the doctors for treatment, they don’t know anything sometimes about the system, and they haven’t had anyone other than the doctor to help guide them. So help me a little bit with that.

Phil: Yeah, well let me tell you three things. What a doctor should do in that situation is say “I can’t give you legal advice.”

Phil: Okay? And then say to them “All you need to do is call the workers’ comp board, it’s called the Disability Evaluation Unit, and they will be happy to send you a list of attorneys who can help you.” Okay? And they will send out a list, and that’s really what a doctor ought to say. Because in the same way that I as a lawyer do not tell a patient “You need to have this surgery, that’s really what a doctor ought to say. But let me tell you what the practicality is.

Phil: Most injured workers find their attorneys through a referral from a doctor. It’s that simple. And if they don’t find it through a referral with a doctor, then they find it through either a neighbor or they find their attorney through their union business rep, somebody like that. Particularly in Southern California, it is enormously common for doctors who treat workers’ comp patients to have relationships with attorneys to whom they refer them.

Dr. John Alchemy: Got it. So bottom line, if I’m a doctor, [and a] patient asks me if they should have an attorney, my answer should be “I don’t know, I can’t give the legal advice, but here’s the phone number for the DEU. They’d be happy to help you out and walk you through the process, help you make that determination.”

Phil: And the DEU, that’s exactly right, John, the DEU has one additional thing that’s terrific for injured workers. They have a person there who’s called an information and assistance officer. And that person’s sole job is to help injured workers and answer any questions they might have and make recommendations to them.

Dr. John Alchemy: That’s great advice. I think, so I think that our listeners – [crosstalk]

Dr. John Alchemy: Absolutely. Phil, before we go, can you give our listeners an idea, if they have questions or want to contact you for further questions, what’s the best way to get a hold of you?

Phil: Sure. The easiest way to always get me is by email at phil@askphilwalker.com. And I always say something that shocks people: I get emails from people all over the place. When you contact me, it’s free, okay? When was the last time a lawyer said to you “I’m gonna give you something for free?”

Dr. John Alchemy: [chuckles] Phil, a real pleasure. Thanks for joining us today.

Phil: Thanks very much, it’s my pleasure.

Dr. John Alchemy: Great. This has been the California Work Comp Report. If you would like to learn more about impairment ratings and California workers’ compensation, please come join us at the website, at rate-fast.com.

Narrator: Thank you for joining us for this episode of the California Work Comp Report. We look forward to next week at continuing our discussion of work comp claims in California. Questions or comments? Got a great workers’ compensation story to share? Find us on Twitter at @ratefast or at rate-fast.com.