\ For Employers \ For Injured Workers \ For Insurance Adjusters \ For Physicians \ Beyond MMI: The Workers’ Comp System from a Workers’ Perspective 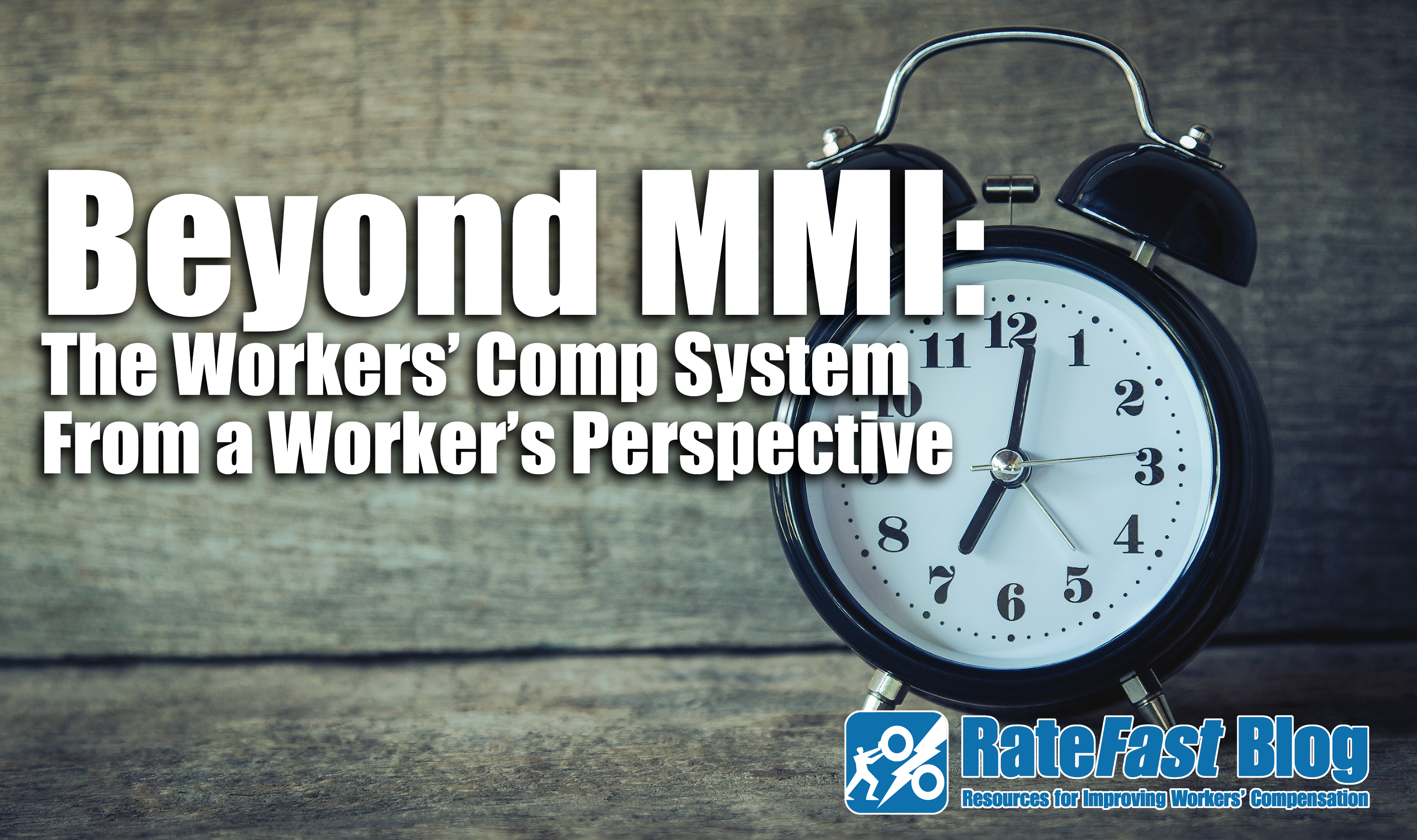 The patient who we interviewed, we’ll call him David, was injured at work in 2012 and has been receiving future care since his case reached MMI in 2014. His claim involved a personal injury to his spine, which continues to affect his ADLs (Activities of Daily Living) to this day.

His claim represents a fairly common snapshot of what an injured worker experiences when their injury results in lasting impairment. It shows a larger picture of the workers’ comp machine in motion, and the ingredients that make the system so resource intensive for all stakeholders.

The Center of Attention

“Whoever it was, they felt that they knew better than me.”

Stakeholders in a workers’ compensation claim, like the work comp clinics and insurance adjusters, are professionals who have made a profession out of learning the tangled web of the work comp field. This extends out to work comp attorneys as well as QMEs, who are hired to exercise their expertise in the field when claims are disputed. This can amount to hundreds of years of combined experience between all of the professionals listed.

Though their skill sets are much different, there is a huge crossover of information between stakeholders. For example, the insurance adjuster must know about a range of injuries as described by the AMA Guides in order to know whether to accept or object to an impairment report.

As soon as their claim is filed, each professional begins writing up plans for the injured worker’s course of treatment as befits their role in work comp.

After his injury, David went through a physical therapy routine which helped him recuperate a bit, however his injury continued to cause him pain. His pain management doctor decided the best course of treatment, and went forward with an RFA for pain meds.

“When I first went on workers’ comp, things happened pretty quick, things got approved fairly timely, but then later on, especially recently, it seems like a lot of things take a while to be approved, and that’s if they’re approved, a lot of times I don’t get an approval.”

Concerned for the health effects of pain medication, David sought alternative treatment, which is when things began to get a little more complicated.

“I got an H-Wave device approved on a month-to-month basis for about two months. It actually was very helpful. I was able to eliminate taking pain medication, so I pulled out the survey cards with everything and did everything that I was supposed to, and then I was told that I wasn’t approved, so they took back the machine. My doctor actually talked to the person representing workers’ comp, and my doctor asked him why they were not approved, and the [adjuster] told my doctor that since there’s no reason that I cannot take the pill, they want me to basically take the pain pill instead.

It’s Not so Black-and-White

H-Wave machines and many other newer alternative treatments for pain can be fairly expensive. Naturally, we expect the best course of treatment for our injuries, but costs are the single most prohibitive factor in the equation. In David’s case, the H-Wave machine was simply too expensive for the insurance company to pay for, given the circumstances.

When it comes down to it, it’s David’s employer who pays for the insurance who issues the treatment, and the employer nor the insurance company have the resources to offer advanced medical equipment to all workers whose injury would benefit from it. Workers’ compensation insurance is just one of the many expensive costs of operation in owning a business (especially in California).

When looking at it from this perspective, it’s easy to see that the workers’ comp system is not so black-and-white.

Money is a prohibitive factor for a workers’ comp claim, but David paints a picture of how inefficient use of time from stakeholders makes the situation worse for him.

“I basically end up calling [the pharmacy] for about a week until I can actually get my pain meds.”

The Pharmacy requires the approval of the insurance adjuster in order to prescribe David his medication, the same medication that he’s been taking. Why does it take so long for him to receive an approval for treatment? The simple answer is that workers’ compensation is inefficient by design.

Every day, the workers’ comp machine churns away, but some people working within it may say that it isn’t necessarily ‘well oiled’. The history of workers’ comp shows quite well that nobody was prepared for the explosion in population and the complexities in the types of businesses that would evolve out of industrialization. Though workers’ comp has seen several reforms in the past few decades, the system looks more cobbled together than rebuilt after each time.

One of the biggest factors keeping workers’ comp from having a complete overhaul is the fact that it is a bureaucracy, and bureaucracies create jobs. Each hand that David’s claim passes through gets a cut from the claim.

For the other stakeholders, David’s injury is a claim. It’s paperwork on file that rotates through a stack of similar paperwork that needs to be addressed when he comes knocking. Though it sounds sinister in essence, it is the business of workers’ compensation as we know it today. David’s injury keeps insurers in business, and keeps his doctor and the clinic paid. This is simply the way things are, for better or for worse.

Meanwhile at the center of it all, David is in pain. His injury is more than a claim because he deals with it every day. Fortunately for David on behalf of injured workers everywhere, change is inevitable. The infrastructure being built by AI and other information technologies may soon pave the way for a new era for workers’ compensation and disrupt the process that keeps David from receiving care in a timely fashion, fulfilling his single wish about the workers’ comp system:

“I would like it to be a little more streamlined and a little faster.”