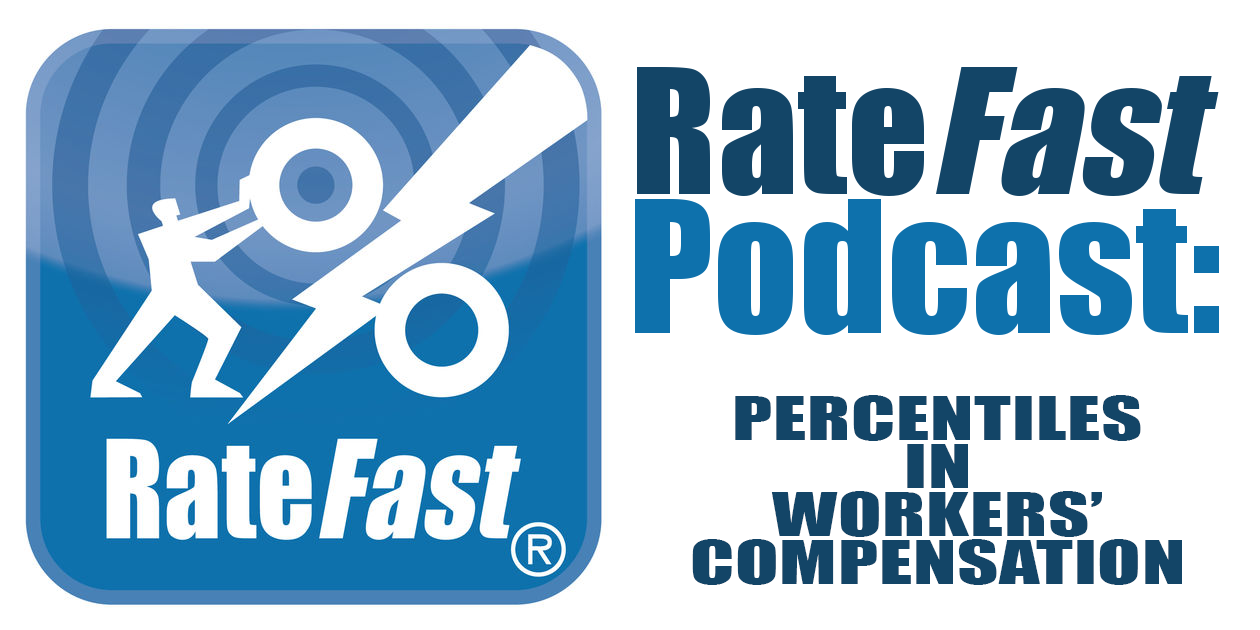 This article is a transcription of an episode of the RateFast podcast, which you can listen to by searching “RateFast” in iTunes or the iOS podcast store.

At RateFast, people like Marten Thompson apply mathematical concepts, logic and rules to data sets while working behind the scenes to keep everything running smoothly. One of these concepts is percentiles, for which an easy comparison example would be the Body Mass Index, or a student’s ACT score. If someone scores in the 95th percentile on a test, this means that they did as well or better than 95% of the people who took it, meaning that they are in the top 5 percent of test-takers.

Percentile (noun) – each of the 100 equal groups into which a population can be divided according to the distribution of values of a particular variable.

Injury map (noun) – a personalized treatment plan created based on objective data about an injury, which gives the work injury claim a direction and a duration.

Whole person impairment (noun) – WPI is a percentage rating between 0 and 100 that describes the severity of an injury in a workers’ compensation case.

BMI (noun) – the Body Mass Index is a value derived from the mass (weight) and height of an individual.

Claire Williams: Hello, and welcome to the California Workers’ Compensation Report. Today is Tuesday, May 16th and I’m here with Marten, the RateFast intern. Hi, Marten.

Claire Williams: I’m doing well, how are you?

Marten Thompson: Not bad, I’m actually coming to you guys live from a bar in Minneapolis.

Claire Williams: [laughs] Good to know, good to know, yes. And enjoy the sights. Do you have a good view from the parking lot?

Marten Thompson: Um, it’s a little industrial, we’re at a brewery, so we’re kinda in that part of town, but luckily you can do math from anywhere.

Claire Williams: Exactly, exactly. And I feel like outside a brewery is a great place, you know, engineering and the science of chemistry all around.

Marten Thompson: So, what are we talking about today?

Claire Williams: Today, we’re going to be looking at percentiles, which is relevant in workers’ compensation because we have to give these percentages of impairment. But let’s back up a bit, and just start off with: How would you define a percentile ranking?

Marten Thompson: For sure, yeah. I think percentile’s a good topic. We can talk about their definition, an example, and then kind of again their importance within RateFast and sort of the medical community as a whole.

Marten Thompson: So, percentile’s a useful tool to kind of see how you stack up against existing data and I think everyone’s most common example of this is in test stores. So in the GRE or the ACT, people often give you results, like “Oh, you fell into the 65th percentile.” What does that mean? That means you beat out, of the data, of the people taking the test that year, you ranked higher than 65 percent of every other test-taker. It could have been by a wide margin, a very narrow margin, but 65 percent of applicants scored your score or lower. And that’s sort of like a broad-stroke definition, and within the mathematical community, there’s actually a little bit of debate about how to exactly define that cut-off, some people say 65th percentile is greater than, or greater than or equal to, and that might seem like a minute difference, but when data sets are small, it can make some small changes. Lucky for us, and certainly within the ACT or GRE, very popular tests, those distinctions don’t matter a whole lot. And it just gives you like a nice ballpark reference for how you stack up against other people.

Claire Williams: Sure, that makes sense. So, in the world of workers’ compensation though, what exactly are we talking about with percentages, and how are they calculated?

Marten Thompson: Okay, sure. So first, you’re gonna need your data. So a good example I think we can talk about within the medical community, is in the 1970’s and 80’s, a survey was sent out and all this data was compiled on the BMI, the Body Mass Index of American citizens, and then from that, the standards for what constitutes a healthy weight, overweight and obese were set. And let’s see, overweight was set as the 85th percentile, and then obese was set at the 95th percentile. So that means, if you, in that time period, had a weight that was in the top 15 percent of all Americans, you’d be considered overweight, and if you were in the top 5 percent of that, you would be considered obese. And so to do that, they just had to collect all the data, order it, and then like, as simple as it sounds, basically just like count up until you’ve counted 85 or 95 percent of all your data.

Claire Williams: Definitely. That makes total sense. And I feel like with those kinds of numbers, that’s something that we all hear about every day, but it’s good to remember that that’s a mathematical term and has kind of these mathematical groundings.

Marten Thompson: You’re right that we hear about these — in the news, there was a U.S. News & World Report headline that read something like “17 percent of Americans fall in the 95th percentile,” and that’s like a complete abuse of mathematics right there.

Marten Thompson: So, that, this was actually talking about obesity rates as well, and the cause of that, that headline, was that the weight spectrum of Americans has shifted toward the heavy end, unfortunately, and so more and more people, based on the 1980’s cut-off, are now in that upper category of obese. And so they really shouldn’t say there that they’re in the 95th percentile, because they’re using new data with old data, and that can kind of lead to some confusion. So I’m glad we’re talking about percentiles here.

Claire Williams: Yes, that is so true, and it’s important to remember logic in the middle of all this, that math should just always make sense, and it can be used easily, especially I think with statistics and percentiles, to kind of confound the surface meaning of what’s being portrayed.

Marten Thompson: Oh yeah, definitely. And like, that’s kind of why I like the idea of percentiles, because I think, you know, it’s a pretty easy concept. If you are in the 95th percentile, you’re in the top 5 percent of all test-takers, or it can be any other data points, but it sorta speaks to a struggle we have with statistics sometimes, where you know, like maybe the people reporting aren’t sure of the methods, or oftentimes, like we pick 85 and not 95 for overweight and obesity, but those numbers may not necessarily make any medical sense, so it’s like quickly a complicated subject once you start getting into how that statistic is going to form your policy. And so with RateFast, we try to think like very carefully about what we’re using this tool to accomplish, because you should definitely start from a firm understanding of what it can and cannot do.

Claire Williams: Mhm. And so, what precisely are our definitions of percentiles? How are percentiles working within RateFast?

Marten Thompson: Sure, so we are doing the greater than or equal to version. So if you were in the 65th percentile, you would be, had you had a score or some other measurement, that’s greater than or equal to 65 percent of all the other measurements, and then we’re pretty much following textbook protocol by compiling a lot of data, that can be on pretty much any number that you can order, and then from that, we’re either taking like AMA-given guidelines for cut-offs, or we’re having to take maybe an ambiguous phrase and from that, make our own cut-off value. And all the while, thinking about the strengths and limitations of using percentiles. One strength is that your data doesn’t have to be smooth, it can be a very messy data set, but as long as you can put it in some order, you can count up until you reach a certain percentile and you’re done. One limitation though, is kind of like we saw with the data that was about the body mass index in America, a limitation from that is that, as your population changes, so like the American BMI spectrum has changed over the past 30 years, your data might not necessarily reflect the current situation. So at RateFast, we’re always feeding new data in, we’re always updating our assumptions, always making sure our data set is fresh.

Claire Williams: Good, that’s what I like to hear.

Claire Williams: Yeah, definitely. And it’s such a really exciting phenomenon, I think, this ability to collect all the data sets of workers’ injuries and be able to really get a sense of the landscape of what these injuries are looking like, and what the data sets that come out of them are looking like, so we can kind of make an index like the BMI, although hopefully not confuse so many people, or you know, have it be 30 years without resetting the baseline. [laughs]

Marten Thompson: Absolutely, I think it’s time for the United States to update that one.

Claire Williams: Yes, I’m with you there. Great, any last thoughts on percentiles today?

Marten Thompson: You know, Claire, I think we’ve covered pretty much everything I wanted to say on percentiles. They’re pretty easy to calculate, you just need to order your data, and if you wanted the 65th percentile, you would just count up until you’ve encompassed 65 percent of all your data points. From that simple calculation, you can get a lot more complex with the policies they inform, but at their root, I think they’re a pretty simple concept.

Claire Williams: Wonderful. Yeah, I would say that it’s been simplified by the podcast.

Claire Williams: [laughs] Hopefully. For any of our listeners curious about injury mapping or whole person impairment rating and percentiles, we have podcasts on both of those topics, and I encourage you to look back through the library and give it a listen. Thanks for joining us today, Marten.

Marten Thompson: Absolutely, thanks for having me.

Narrator: Thank you for joining us for this episode of the California Workers’ Comp Report. You can follow RateFast on Twitter at @ratefast, or visit www.rate-fast.com to learn more.