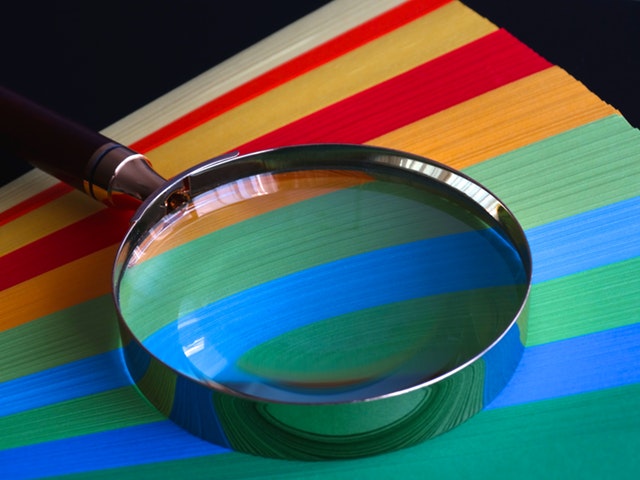 This article is part of a series on the top reasons why insurance carriers object to a workers’ compensation report and return it to the medical practice unpaid. This article is intended for medical providers, administrative staff, office managers, as well as insurance claims adjusters.

This is now the fourth in our series of Common Objections to Workers’ Comp Reports. If you haven’t already, read the previous articles on History of Symptoms, Activities of Daily Living (ADLs), and Prior Injuries.

Not everybody can do the splits, but your injured worker used to be able to get pretty close. Maybe they can’t go as far now because their range of motion in their left hip has been limited due to an injury at work. In fact, the key to measuring how much they can do the splits now lies in how far the injured leg moves from the hip as compared to the uninjured leg. This gives a crude idea of the examination in workers’ comp.

Failing to perform the examination according to the rules laid down in the AMA Guides 5th Edition gives the insurance carrier a great reason to object to your report, and the impairment rating that’s based on. Even if the insurance carrier accepts a report with an incomplete exam, the impairment rating is likely to be either too high or too low, which is bad news for at least one of the stakeholders.

Failure to document an exam correct on the report is setting yourself up to have a QME called. Take it from us: it’s better for everybody if the primary treating physician gets the exam right the first time.

The section of the PR-4 report dedicated to examination looks like this:

This is how it would look in the Doctor’s First Report section of the RateFast software, specific to our worker with the injured hip: 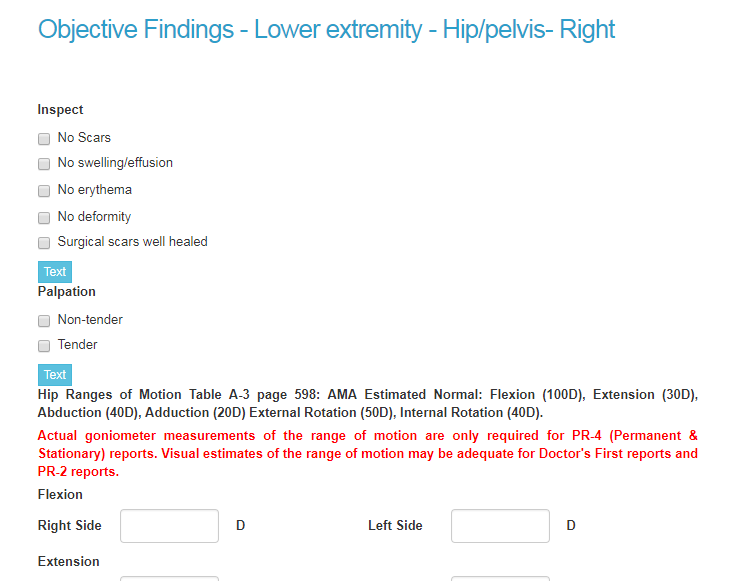 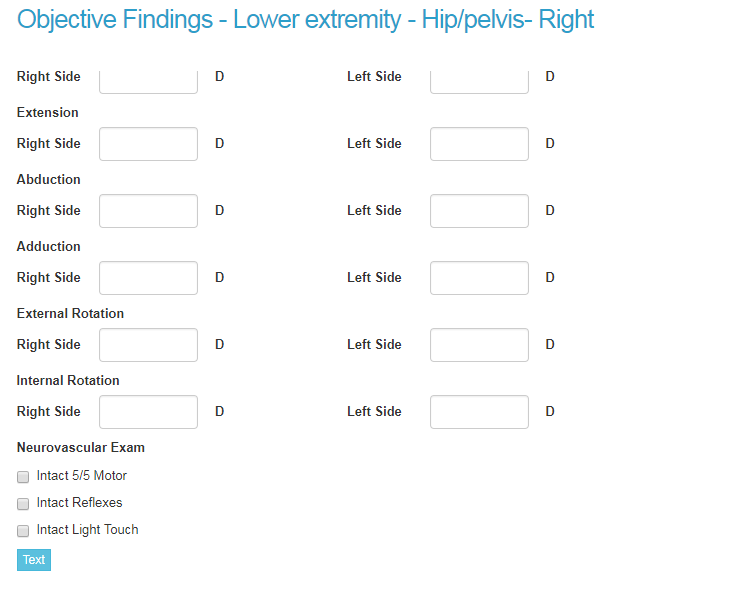 Let’s continue with the example of the worker with the injured hip.

The injured worker is employed at a small chain grocery store, where he was hurt in a freak accident when a car slammed into a shopping cart packed to the brim with groceries, sending the cart flying straight into the left hip of said worker, who was standing halfway outside of the building. This resulted in a hairline fracture of the ball joint.

The Tools of the Trade

There are several tools workers’ comp doctors use to measure the injuries of their patient. The correct tool to use for measurements changes depending on the affected body part.

Physicians who are new to workers’ comp often fail to use the correct tools for measurement. Measuring with different tools–or not even using tools, but instead “eyeballing” it is easier to get away with in non-workers’ comp cases.

But in workers’ comp, where an employer’s insurance carrier is responsible for the payout of the worker’s injury, taking the correct measurements iwht the correct tools is essential. Failure to do so is a great way to have your report returned.

If you use these tools to measure the injury according to the instructions in the AMA Guides, then you will have a complete and reproducible data set that can be used to determine the whole person impairment correctly.

Often, a visit for a workers’ comp injury would be limited to a 20 minute appointment, which may seem like hardly enough time to shake a patient’s hand, but what is done in that 20 minutes could be the difference between a few extra measurements and a headache that lasts several months.

Assuming for a moment that the attending physician sees patients that injure their hip on a fairly regular basis, there is a possibility that the physician sees this as a routine sort of injury, and guesses or “eyeballs” the extent of the injury, even if the patient’s hip is far worse (or even better) than the physician assumes.

The physician may decide to skirt around using the goniometer altogether, in favor of his own opinion, and simply choose an arbitrary number. Many impairment reports from primary treating physician’s report round even numbers, and don’t include exact measurements.

A report that says that a patient has lost 60% of the range of motion without providing the actual measurements taken by the goniometer will raise a red flag in the insurance carrier’s evaluation of the report.

This could cause the claim to be delayed, objected to, or possibly even lead to legal action, in which a doctor must give a deposition about that particular visit.

If this happens, cutting a corner in order to save a few minutes in the exam room does not result in any saved time. Take it from us: it’s faster and more cost-effective to learn how to take the measurements correctly, and to include them in your report.

The examination of a workplace injury should be done correctly, and the results fo the exam should be included in teh impairment report. The exam can make or break an impairment report, depending on whether it has been done correctly (measuring in the way described by the AMA Guides), or poorly (guessing). A good examination means a thorough report, which results in speedy compensation for the medical practice from the insurance carrier, and fast results for the patient without the need to drag out the claim more further visits, QMEs, or litigation.